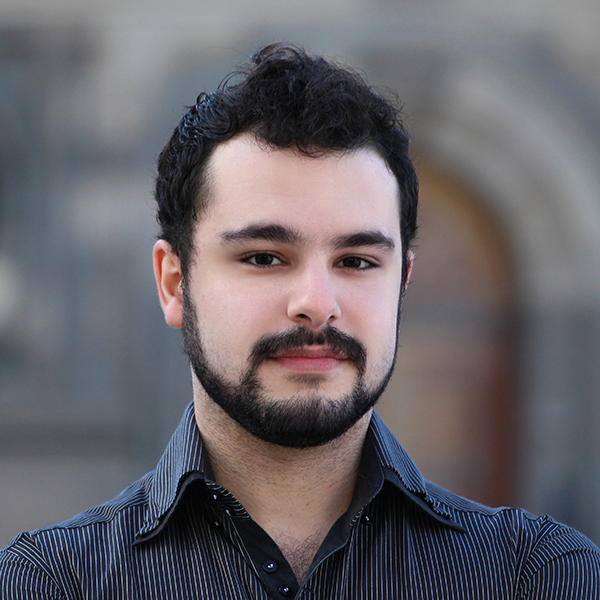 PhD in Linguistics and English Language University of Edinburgh 2019 - 2023

Linguistics and English Language Postgraduate Conference Chair (2019); Co-chair (2020) The LELPGC is a yearly student-run academic conference in Linguistics and English Language held at the University of Edinburgh. I chaired it in 2019 and co-chaired it in 2020. Designer, Photographer, Web-designer, Organiser (2018) I modernised the conference's application and abstract submission processes by developing an elaborate Web application, all the while single-handedly designing a corporate identity for the conference — including logos, posters, programmes and an advertising campaign. This was used in 2018 and 2019. I also helped the chair review abstracts and organise and run the conference.

AUB Outlook Layout Editor (2016-2107) AUB Outlook is the weekly, student-run, print-and-web newspaper of the American University of Beirut. Its layout editor designs the newspaper and lays out the articles and images meant for each issue within the last 12 hours before it goes to print. This is mostly a weekly test of stress, speed and design.

Lebanese Red Cross: Youth Department Web Developer (2015-2016) The central division of the Youth Department of the Lebanese Red Cross had an IT Team for a while, which worked on creating an internal website to manage members' files and organization records. The project was discontinued, but I was part of it from start to finish. Graphic Designer and Photographer (2013-2016) The same division has a PR Team, which works on taking and maintaining photographs as well as desiging posters, and approving ones they receive from local centres, based on whether or not they measure up to the standards expected by the LRC. I took pictures, edited commercials and designed posters as part of this team.

I nurture interests in various areas mostly relating to human culture: languages, religions, the arts, history, and the interaction between peoples. My hobbies include programming, web design, photography, screenwriting, directing short films, and watching series. An important part of my professional interests is in marrying computer science and linguistic research, and there are a few projects I've worked on which are accessible on this website. On a more personal and creative level, I am currently in the process of writing a novel and developing a universe in which to set upcoming stories, not unlike that of one of my inspirations - JRR Tolkien - but I think of these stories as something rather personal, and am more likely to publish what I come up with for my universe than these stories themselves. The main interest I have in creating said universe is the research work that goes into building such a thing - because it forces me to study some basic geology, chemistry, physics, biology, and of course because it gives me more incentive (as if any of that was needed) to read up on history, linguistics, religion, and early human cultures.